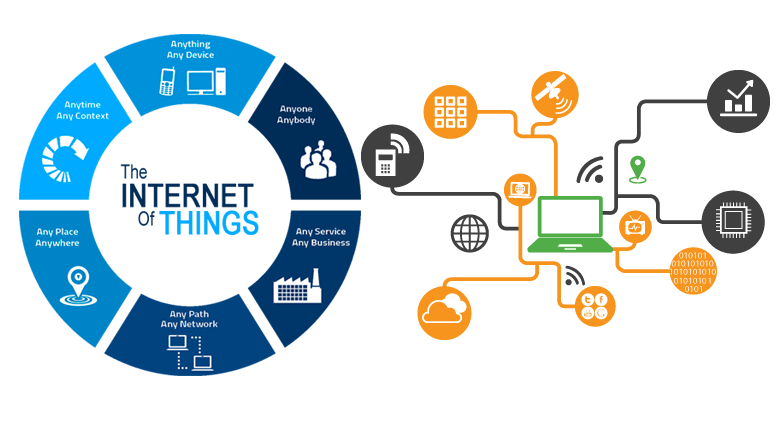 Internet of Things (IoT) is the next big thing that will change the standard of living for us. For those who are still untouched by the concept. Let me try explaining it in simple words.

IOT or Internet of Things states the technology that enables things to interact (exchange data and information) in between. You can refer and browse through the internet for a more accurate and descriptive definition. But this is the best that I think will help you understand the concept.

Just imagine how will the world change if things can make a decision on their own, which is the key concept of IoT. Say for example you are heading back to your home from the office. With that information, your AC switches on to maintain the room temperature as per your comfort before your arrival.

Now you might wonder how can this be possible? It’s just the smartphone updating your location and sending signals to your home appliances accordingly. Cool, right!!

Now, you will have two options either to enjoy the technology sitting at your home and get your life comforting with IOT, which in fact is the easiest one. Or you can spend some time exploring how this works and how can you contribute to make the world a better place. Being an IOT professional is just not a job, its the most adventurous and interesting thing you can ever be involved in.

Let get started with IOT. Here is the architecture diagram that will help us understand the basic flow of IOT

To start this on a very basic level, an IOT architecture will have four basic building blocks. Starting with the Actuators/sensors, these are the primary and key components. They will analyze the change in the environment and produce the signal, or we can say changes its state.

I know this will be confusing if this is your first time getting to know IOT or if you are not so much involved in Electronics. I still did try keeping it to a very beginner level.

So, let’s try understanding the function of a sensor with an example. LM35 is a precision IC temperature sensor, its output is proportional to the change in temperature. The sensor will continuously monitor the temperature and provide the output for maintain the temperature level. Or take a very basic example of daily-life.

Have you ever wondered how can you see the speed of your vehicle and can observe the changes in real time? Ever given it a thought!! Yes, that is the speed sensor that detects the changes in rotation of your wheel. Now by looking at the output you can decide either to increase, decrease or maintain the speed.

Without stretching much, let’s talk about the next building block which is the most important part. Also, called as the heart and brain of the IOT system. I am not sure saying it just a micro-controller would suffice as this comprises of many components and is an embedded circuit in itself.

Arduino the platform you need

There are various circuit boards that are used worldwide. The most popular that captured the market for beginners is the Arduino Boards. Again the most widely used board in Arduino series for basic usage is Arduino Uno. I would like to clarify that I am not associated with any marketing agency what so ever. This is purely based on self-experience and market analysis.

Needless to say, this is where IOT starts and as a professional or hobbyist, we all need to start from somewhere near to the ground 0. I will shortly write another blog on the Development Boards and how to chose one looking at the requirement you have.

Then comes the Gateway, which indeed differentiates embedded technology and IOT. Controlling the temperature of your room, turning ON or OFF with a remote, automatic door opening while someone walks in. These technologies are now seen often in our daily life and we are adopted with them. IOT is taking the same technology to a new level wherein we do not have to be physically available i.e. the human interaction will no longer be required in the process.

The exchange of data and information would purely be machine to machine. As simple and nice this sounds, it gets more and more difficult in practical implementation. While we will try to avoid the physical presence of an individual, the only possible aspect of this would be via the Internet which can be accessed anywhere in the world. Thus to complete an IOT network, Gateway is an important assembly unit.

Now, at the final stage, we need to provide a common platform to both the machines for successful communication. To achieve this we would need a space at a place which can be accessible by both Tx and Rx from anywhere irrespective or location. A space on the internet is the best thing that suffices the purpose also called cloud storage